A year ago I met a man from Germany in Playa del Carmen. He was barefoot, wearing a cap, an SPF rash, gloves and sun glasses. I couldn’t see his face, but I could hear his voice. And he was loud. He was asking his two kids with enthusiasm while they picked garbage from under a pier.
They were passing each other plastic bottles, beer rings, cans, glass bottles, pieces of plastic, candy wrapers and all sorts of debris.

“How embarassing… a foreign man organizing and cleaning Mexican beaches”, I said to myself.

I joined the volunteers and started cleaning a long way along the beach. We filled bags with straws, beer, soda and water bottles. We found pieces of plastic, packages of junk food like chips and candy, ketchup and mayonnaise bags. We even found a used diaper! We finished the long journey with several bags that we left inside containers. To celebrate our accomplishment, we went to have breakfast, exhausted. 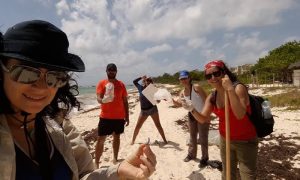 Nine months later, Kay, that man that I met cleaning the beach, invited me to another beach clean up. I was now living in Playa del Carmen, so I didn’t hesitate. The date was the first Sunday of February at 08:30 in the morning. Since that day, I promised not to miss a beach clean up and I joined forces with Kay to bring more volunteers to this beautiful iniciative by Kay.

“Who’s paying you? Are you from the Government? Which association are you from?” are some of the questions people ask when they see us cleaning the beach. Some people approach to us and give us their trash, while others actually join us for some minutes. We also get some cheering and many “thank you”.
“Excuse me, may I take these cigarette butts that you’re sitting on?”, I ask kindly to smokers who can’t tell the difference between an ashtray and the sand on the beach. The last thing I want is confrontation, is bad enough to see the amount of garbage that people leave behind.
“They aren’t mine”, they claim while I pick them up. “Sure, it’s obvious it wasn’t you who left the cigarette butts here, I don’t think you like to enjoy the beach while sitting on them”, I reply.

What’s in my mind while I pick up trash?

I wish every person that sets foot on the beach were in love with our Planet like I am. I wish they could sigh like I do when I see the sun rising while waves break in the sand and seagulls fly.
I wish they could feel how nice it is to leave a place like we found it, not worse.

On April the 22nd, I was at a beach clean up organized by Kay to celebrate Earth Day.
Local, national and international volunteers showed up and Kay and I were very excited to see so much people joining us. 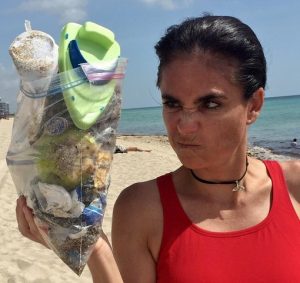 We started at 16:30 and finished at around 19:00. We walked from Cocos Beach all the way to Punta Esmeralda.
I couldn’t believe the amount of people… and garbage. I was witness to an environmental disaster. As much as I tried to see a good side to it, I just couldn’t. We left the bags next to the garbage bins as they were already filled with trash.

I took the traditional photograph of the group and we decided to call it a day. On our way back, we kept picking up garbage, and then, the unexpected happened. As we were walking, a man threw a bucket filled with beer bottles over a fence. On the other side of the fence I could see the jungle.
We all screamed at the same time: “No!” But the man kept walking.
So, I ask again… why do we clean the beaches? We clean the beaches because we can’t wait until someone does it for us.

We clean the beaches because it’s ours. We clean the beaches because we don’t want humans to keep destroying themselves. Scientists predict that by 2050 there will be more plastics, than fish in the sea.
I don’t know about you, but we can’t allow this. If a man with no empathy to our Planet throws a bucket filled with beer bottles to the jungle, then I must keep doing this and pick 70, 80, 100 beer bottles. 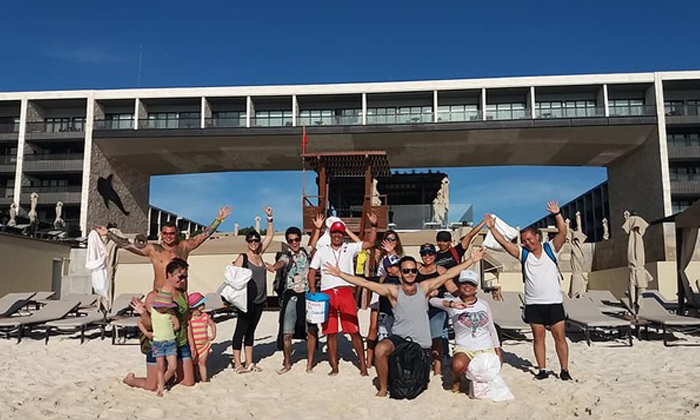